The fact that the temperature dropped about 20 degrees in the morning made us wake up early. Plus I was afraid that guards were going to show up at some point.

We had breakfast at a little cafe right on the coast, it was really good and the service was great, a first for Europe.

It took a long time to find the church and we finally stumbled in, stinky, with our packs and looking like serious bums. None of us had showered in days and we’d be sleeping outside, on trains and on the beach. The members at the door, the leaders, didn’t know quite what to make of us. Gary talked to them and told them we were members and wanted to come to church. They welcomed us though looked suspicious.

Gary was able, and has been able to communicate pretty well with Italians. He just speaks really simple Spanish and they assume he has really horrible italian! He’s definitely been the most useful out of all of us in Italy. There are quite a few people that speak French but Spanish has been a lot more useful. Lithuanian…well…we have yet to use it.

We barricaded ourselves in the bathroom, washed our hair as quickly as we could and changed into the nicest clothes we had. Gary and Lewis sported polos while I had a white shirt. Gary bought a couple ties in Paris (Yves Dorsey, 5 euros!) so we looked snazy. Right before I had my shirt on the first counselor walked in and asked us what in the world we were doing. Once again, Gary saved the day explaining that we wanted to look nice for church in spite of our situation.

The missionaries told us that there was actually a an english speaking ward because of the military base so we rented some scooters and came back. The members were nice and one of them, Lilly offered to let us stay at her place with her family.

After church we hung out at the beach. It was beautiful and a lot of fun. Lewis and I started talking to some girls, one of them was french and the other one spoke spanish so lewis left and Gary came and talked to the spanish speaker. I went over to meet their friend and was asking everyone where they were from. The last girl said that she was, no joke, I couldn’t make this up, Lithuanian. I did a double take and confirmed it with her. I went and got lewis and we all sat there speaking different languages on the beach until sunset. 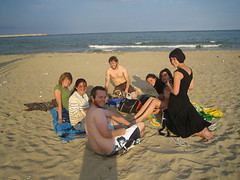 We rode our scooters into the setting sun to Lilly’s house.