Waking up on the train was funny to say the least. The train actually nearly stopped about an hour from Paris and everyone woke up and started moving around. Gary and I were sitting outside our cabin looking out the window. I remembered that I had forgotten my water so I opened the door. One of our unknown room mates was just putting his pants on.

Funny, I usually like to know the names of the people I’m sleeping with.

We had a little extra time between trains in Paris. I figured we’d take RER because the eurorail gives us free eurorail tickets. I went and asked at the ticket window and the guy said no. We just bought metro tickets instead and went up to Notre Dame de Paris. 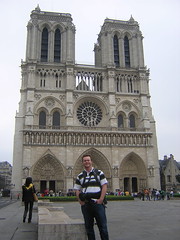 We walked around a bit and Gary really liked it. I sort of rushed him through because I wanted to make sure we made our transfer (which we made an hour early, sorry gary). We’ll be back there next Wednesday or so to goto the Crypts so he can spend more time if he’d like.

Walking up the street took us past the Hotel de Ville, which is very impressive, and le centre Georges Pompidou, which is very ugly. That ugly monstrosity is praised for being different from the convention and totally revolutionary. I think that no one has ever done it before because it’s a bad idea and it makes an ugly building but I’m probably offending someone. 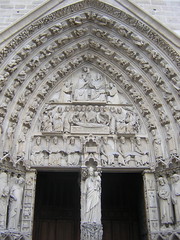 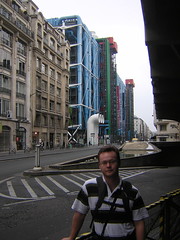 That done we walked by the LDS church on Rue St Merri and got some delicious pastry breakfast before going to the train station.

Making Friends:
Part of our trip has always been to not only visit old friends but also to make new ones. On our way over to Reims we met a very nice Remoise(Girl from Reims) who happened to speak english.

Gary instantly loved her We had a good talk with her and when her Mom picked her up she offered to give us a ride to the Simonet’s place.

At the Simonet’s we were greeted by Alienor who gave us some enthusiastic Bisous (French kisses, no not that kind). Honestly, after being in Spain getting to Reims and finally the Simonet’s felt like coming home. The family was so welcoming I felt immediately at home. Marie came over with Deb and Gary had some people he could speak english with.

After enjoying the company for a little while we went into Centre-Ville to goto the Four-a-bois, the best bakery in France and the Cathedral.

With delicious french pastries in our bellies and Alie as our guide we visited the Cathedral. I had tried to console Gary about his brief visit to Notre Dame de Paris with the fact that he would see a better cathedral in Reims. Reims, to me, is the most beautiful cathedral with Chartres coming in second. 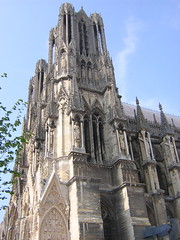 Reims has so much cool stuff to offer. It’s the home of the only Catholic statues of smiling angels, there is a full size baptismal font, it has the most expressive and interesting stain glass work and is the site of every French kings crowning (except one) and Clovis 1:The First King of France was baptized by immersion there 1700 years ago. 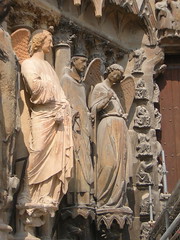 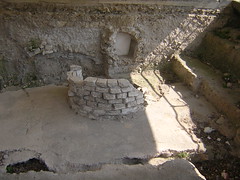 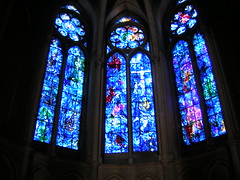 Reims Cathedral History – Skip this if you want to learn anything cool
Alie did a good job of showing us around the cathedral. She pointed out things like ancient, insulting graffiti written in Latin. Funny that hundreds and maybe even thousands of years ago people still wrote the same vulgar stuff on walls (it’s just in Latin).

Thierry (Papa Simonet) showed up and shared all sorts of interesting stuff. Apparently back in the day, we’re talking 500 AD, Clovis I was baptized a christian there. The whole cathedral is actually built on and around what would become Roman Baths.

Thanks to some hot water springs running under Reims this site was used to preform all kinds of baptisms by immersion before sprinkling came into fashion.

This cathedral is also the site of the legendary headless bishop. 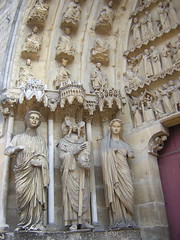 Once again the setting is “The Day” as in, “Back in”. This gang of Vandals/Raiders/Bad guys, rolled into town to sack the place. Naturally they headed straight for the Cathedral because that is not only the center for town life but also the home of guarded treasures (La Vase de Soisson actually comes from Reims if my memory serves me correctly).

The raiders show up at the steps of the cathedral, torches ready to sac, pillage and rape their way to riches. They probably expected to find a whimpering, cowering and fleeing populace. Instead they were greeted by the local Bishop.

He told them that they needed to leave because this was his town.

They cut off his head.

Then, as the legend goes, the bishop picked his head back up and, in a disembodied state, told the Vandals that they really needed to leave.

That was enough and they took off. Legend goes that the bishop went onto to live and work for a few more weeks before finally dying. Of course, most people think he was actually just cut in the neck or something but its a powerful story and makes for better reading this way.
End Awesome History stuff

Oh, did I mention it was my birthday? It was along with Sylvie’s (Mama Simonet). We had a delicious dinner which consisted of Raclette and they even gave me presents! 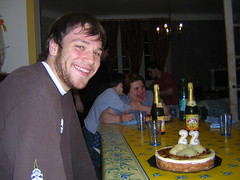