Europe Day 1: Getting to Spain

In the post 9/11 world everyone seems to have an irrational fear of airport wait time. I figured we needed to be to the airport an hour and 20 minutes before our flight and we’d have plenty of time. I mean, when I was in Paris it was my job to get people on airplanes and that was generally pretty reasonable.

Well, we listened to everyone that said we needed at least two hours and arrived around 9 for our 10:50 flight. To my delight, and in a way my dismay, airport security has been streamlined. Self-check in took about 35 seconds and we essentially walked through security. All in all it took us about 10 minutes to be waiting at our gate. Kudos to the airport for being quick and painless. 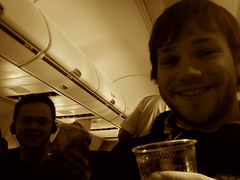 We had a 3 hour layover in Newark, NJ. I guess I didn’t realize how close NJ is to NY. It dawned on me as we flew by the statue of liberty. 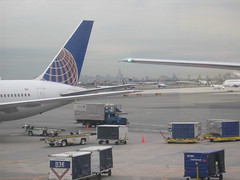 People watching is a popular airport pastime and Gary immediately picked out a group of BYU students. It was obvious before we saw their scripture cases. There was a whole group of ’em headed down to Jerusalem to study at the BYU center down there.

We met some Spanish people who were really nice. It’s very peculiar for me to listen to them. Gary was talking up a storm and I could follow their conversation pretty well. Of course, anytime I went to say anything only english, french or some adulterated version of the two would make it to my lips.

About an hour before boarding was to begin this mad rush of Spaniards crowded the gate. They stood there in line as if they were about to bum-rush the plane. We pointed it out to our new spanish friends and they told us that Spanish people loved lines and are super impatient.

They seriously all stood there in a giant mob for an hour. Then when regular boarding started people kept on trying to duck the lines and slip past the flight attendant who was yelling at them all in spanish with the vigor of a lion tamer. It wasn’t just young people jumping into the fray, we saw an old lady try to jump the lines only to get caught and put back into the crowd.

We’re getting ready to land here in the next 40 minutes and then we’ll head out to explore Madrid for about 10 hours. Pictures will surely follow. 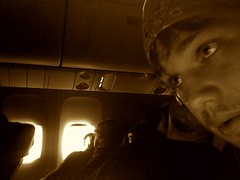