Gary and I were a little surprised to see that there is, in fact, a ward in Utrecht. We were even more surprised when we showed up that they gave us headsets and translated sacrament meeting for us. Good on ya! We’d been up late the night before and were full of excuses so we left after sacrament meeting. Gary was really tired so he went to sleep back at the house and I went to Amsterdam.

Amsterdam is only about 20 minutes by train from Utrecht, which makes Utrecht an excellent base of operations. Coming out of the train station there are two ways you can go both forward, Right and Left. Now if you’re a good boy or girl you will remember that you should always “choose the right.” This rule holds true in Amsterdam. 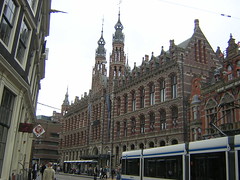 The right path takes you past clothing shops and a pretty nice part of town. Rivers criss cross the entire city and the architecture feels dark and warm. I really like it. 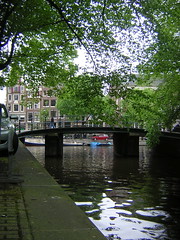 I was starving so I was really hunting for a good place to eat. Kebab shops were everywhere but I wanted to get something…Dutch. I finally stopped in a Cafe, spent 10 euros on a chicken plate with 4 euros of water to wash it down. 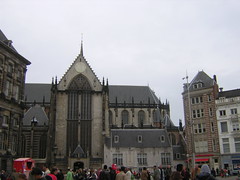 Travel Tip: A kebab is 4 euros and you get fries. It may not be authentic but all you can get for that price in a cafe is water. 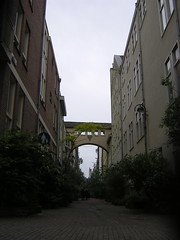 Verdict of Amsterdam: exaggerated. When I got back to the house I was talking to Yvon (one of Sylvia’s room mates) about it. I told him that everyone exaggerated and told stories about hookers and girls in windows for sale. He sort of blinked and laughed. “You didn’t see them?!” he asked, “You weren’t in the right part of town for that. If you want we can go down to Utrecht’s red light district so you can see the girls in the street. I think we have 3.” I declined and I’m happy to think that Amsterdam is just as crazy as everything thinks it is.

There were plenty of drugs for sale…

That night we met back up with Sylvia and went out for a drink with Evanne and this dutch dude that I can’t remember the name of.

Tomorrow it’s off to Germany.