For anyone thinking of a great european voyage taking the train through the Alps is a must. First of all, swiss trains are really nice, second of all the mountains are gorgeous. I felt like such a dork for telling a swiss girl the day before that she needed to see Colorado because we had beautiful mountains. I wish I had a better picture but alas. 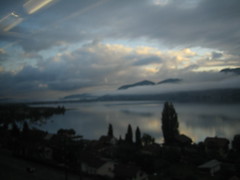 We stopped in a little town called Brig to change trains. We had a few hours so we walked around and explored. We were pretty hungry so we stopped in little restaurants. This part of switzerland was more french than others but not totally french. Lots of German and italian ran rampant. When we got into these restaurants the conversation went like this (except in French):

Hi, can I see a menu?
Who’s menu?
ummm…yours? I mean this is a restraunt, that’s what the sign says.
I don’t cook, we have sandwhiches and coffee.
Alright, thanks anyway.

Seriously, who doesn’t have a menu? It happened like four times! We finally found a nice Pastry shop and got some cheap and delicious food. We stopped in a swiss bank and toyed with the idea of opening a swiss bank account. How cool would that be? 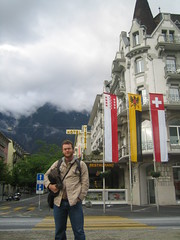 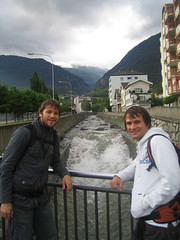 Wow, I just realized how silly it would be to mix Venice with this entry. haha, that would be silly.