Stepping off the train in Venice was an amazing site. The city is so beautiful and old. The thing that I’ve come to realize about Venice in retrospect is that Venice is essentially Disneyland. It is only a tourist town, I don’t think it has any indigenous economy. The other thing about Venice is that, while you could spend days exploring after you’ve walked a few miles everything is pretty much the same, amazing and beautiful but the same. 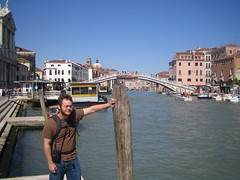 We found a restaurant that looked good but they were closed. We made note to come back later and stopped in a Pastry shop that was fantastic and inexpensive.

We stopped in a little church and found this cool pirate style floor. 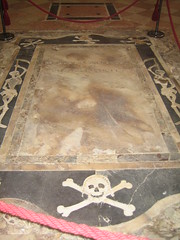 I have more pictures on my computer but my flickr account is getting fulll so enjoy these other pictures of Venice instead. 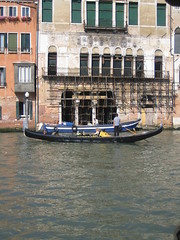 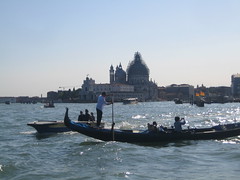 We hopped on a bus and cruised around, did I mention that the bus is really a boat? It’s awesome. I think it costs money but we couldn’t find a place to pay so we just got on and crossed our fingers. I was talking to a french family in the boat and they said they had to pay but that the ride would be, apparently, free for us. Score. 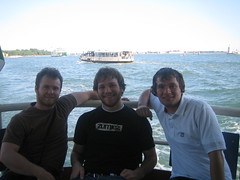 Did I mention that the french are all over Venice? I mentioned to this French lady that it was hard to communicate. She told me to just speak french to the italians and they should get it.

We took the boat up to Ledo and walked on the beach. It was beautiful. When we got back to Venice it was late enough that the restauraunts were opening again. We went back to the pre-scoped spot and sat down for some authentic Italian.

Travel Tip: Do not try to get pasta or lasagna in Venice. Stick to the pizzerias.

The pasta was stale, the lasagna fresh from the microwave and the whole meal was overpriced and not great. Sure the ambience was incredible but it didn’t make up for a crappy meal. Later that night we got really good pizza, it was like 1.30 a slice and they were huge and tasted like heaven.

We met some really weird american and canadian girls, they were total weirdos and I think they were lesbians or something. Anyway, we hopped on the night train to Napoli (Naples). We figured we’d just sleep 6-7 hours on the train and be good for the next day. We were mistaken.

We must have missed the train for Naples and got on the train to hell.

I debated making this it’s own entry but I guess I won’t because I have so many entries to make.

After about an hour on our pleasant journey our train stopped and all of the sudden there were drunk people everywhere screaming. Apparently the Napoli soccer team had just won and were now taking the train home. The night train. Without telling anyone they changed our normal high speed train with a “Football train” that means it stops at every station and they don’t look on it anymore. Infact they lock the second class trains so that they can’t get into the first class areas.

Who I believe to be the coach came into our room and basically kicked us into sitting up and making room. More football players (btw I’m talking about soccer) came into our room. Lewis and I were sitting opposite each other with Gary in another room. While our new room mates seemed loud it would probably be ok.

Then the guy sitting next to me asked if he could use the table really quick. Of course! I switch places with him and he pulled out some cocaine and made a few lines. He did one then his friend leaned over Lewis to do his. It was time to change cars. We left and found people everywhere outside the cabin. I looked in Gary’s room where he was still the only one occupying his bench. He asked me what was going on and I told him to count his many blessings.

Lewis and I left to find a better spot. While we were gone a prostitute came and laid down by Gary. While she slept she kicked him in the head.

Lewis and I made our way past kegs of beer and finally split up into two calm cabins. The whole night the footballers screamed about no sleeping and one of them found the intercom box. So they made announcements telling us all, at +10 dB how much they liked cocaine and that no one would be sleeping tonight.

They were almost right, luckily the fact that we had slept only a few hours in the streets the night before allowed us to pass out somewhere between the screams, chants, cocaine and alcohol.

In the morning the train was a wreck. Doors were ripped off their hinges, there were bottles and cans everywhere. A testament to the hellish demons that inhabited the train the night before.

We stumbled out of the train feeling somehow lucky to be alive. Now in Napoli we made short work of getting robbed.