When we tell people about our trip, how we’re doing it, sending just hours in some cities they think we’re crazy. They’re probably right. Rome is, in my mind the most extreme example of what I like to call “ X-Treme Traveling.”

Because of my accident we had to stay in Sicily an extra night. This meant that we would only have a few hours in Rome before we needed to catch our flight. Our train got into Rome around 5 AM and we went straight to the Colosseum. 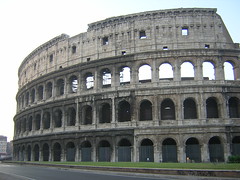 The metros in Rome don’t seem to be super common. More like intercity trains, like the Cercanais in Spain or the RER in France. We just walked from there to St Peters (Thats the Vatican) stopping to take pictures of some random ruins. 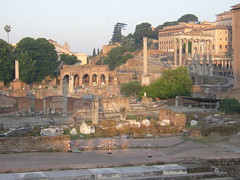 Once arrived at the Vatican I sat down by the fence while Lewis and Gary talked with the nuns that were waiting to get into the Vatican. I was really tired because of how hard it was to sleep on the train. Something about most of my joints feeling like they were melting. I must have looked like a bum because people gave me money.

Nah, I’m just playing, but that would have been awesome.

We started walking around the edge of St Peter’s. 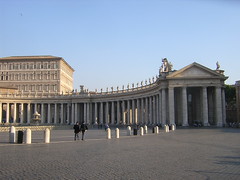 A guard ran up to us and told us that we needed to leave and go around to the other side of the Vatican because we couldn’t get to the Museums that way. Thanks for helping all 30 people that we asked hours earlier! We went around to find a line that was about a mile long…nah, more like a kilometer.

So we went to the Parthenon. 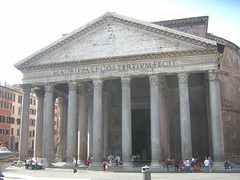 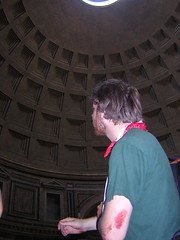 To me the Parthenon was the most impressive thing that I saw in Rome. It’s amazing. The dome is so massive and so old that the logistics are nigh unfathomable.

The coolest part is that up in the very middle of the dome is a giant hole that lets light into the church. The circle is open, there is no glass, there is no shade. When it rains, it rains it he Parthenon. It’s incredible.