Thursday we woke up late and spent some time around Luis and Amaya’s place getting some stuff done and planning the next leg of our voyage. Apparently getting from Madrid to Paris is more complicated and expensive than we previous thought. 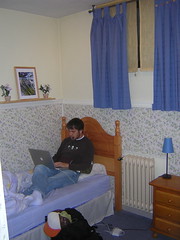 The only trains that run direct are overnight trains and they’re half train half hotel. Even with the eurorail pass this would cost us 70 euros (about 100 US). After looking into all the other options we found that if we go through Barcelona we can catch another overnight train that doesn’t have beds. The catch is that it will take us a total of about 23 hours to get to Paris. Plus our final destination isn’t even Paris, it’s Reims which is another 2-3 hours. So all in all we will have traveled for about 26 hours by the time we actually roll into Reims. If I were planning this trip over again I think I would have opted to skip Madrid and go through Barcelona.

Of course then we wouldn’t have met Luis, Amaya and their two children who are really quite remarkable and worth the extra time….

Speaking of, after spending 3 hours at the train station getting our tickets we started to head home.

This may require some explaining. You see, Spanish people love waiting in line. Don’t ask me what it is. Just look at this picture: 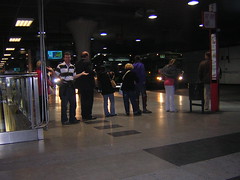 What are they waiting for? Good question.

So when we got to the train station we took a number. 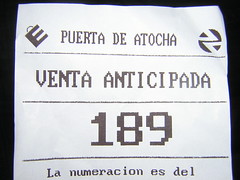 Now serving 65…
As if that weren’t enough they put us in the wrong line.. Anyway, back to our story:
It was getting late. We got to the bus station we needed to take around 10 and stopped at a convenience store to get something to cook. The spanish people call these stores “The Chinese” or “Chinos” because chinese people are the only ones crazy enough to have stores open at that hour.

After getting our food we hopped on the bus and made the 25 minute trip out to the suburbs where we were staying. We asked the bus driver to let us know when our stop was up. He booted us out in the wrong area and it took about 2 hours of walking along with asking lots of people for directions and a phone call we made on a borrowed cell to get into the right area. Of course the girl that let us use her phone gave us the wrong directions so we wondered on. Finally Luis found us in his car, when we hadn’t shown up after 10 minutes he came looking for us.

It’s quite the site; after you’ve been wandering around in the middle of a city you don’t know in a country you’ve never been to, being completely lost, to see a benevolent Spaniard lean out the window of his car and say “Did somebody call 1-800-save-me ?” and laugh. Quite the sight.

Relief doesn’t quite cut it.

In the morning Luis told us he’d take us to the train station and make sure we got onto the right train, which he did. We said our goodbyes and I definitely want to keep in touch. 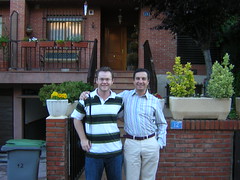 After a missed rendez-vous with Robynn 🙁 we got on our train and we’re almost to Barcelona. We’ll have a few hours to walk around before we need to catch an overnight train to Paris.

You should get 4 or 5 people to just start a random line in the middle of the sidewalk or somewhere. See how many people you can get to join the line and after you've built up 20 or so, just leave.

Come back the next day to see how long the line has grown.

You should get 4 or 5 people to just start a random line in the middle of the sidewalk or somewhere. See how many people you can get to join the line and after you've built up 20 or so, just leave. Come back the next day to see how long the line has grown.