My knowledge of Paris is a startling reflection on my experience in France. Where are the catacombs? I don’t really know but I can tell you where to get a delicious Pizza Kebab or find a genuine Jewish Falafel. This sort of problem leads to silly mix ups.

I’ve been reading that Sarkozy (now President Elect of France) wants to retake Powers given to the EU to control French affairs by Chirac. So people were having a rally to support the EU. Gary was…displeased. He hates the EU.

Anyway, we get to Notre Dame and I see a sign for “La Crypte,” Anyone can feel free to jump in and correct my French but to me the Catacombs are a Crypte while a Crypte is not necessarily a catacomb. So we went into the Crypte and found the unearthed ruins of roman ramparts and what not that once sat at street level. 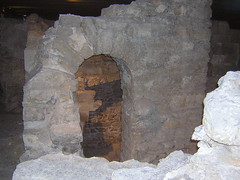 I’m going to interrupt myself with some more disjointed comments now.

Europe is Growing:
I don’t really understand the process but it’s something that I had noted when I was in Chartres.

I have a friend there with a house that has a 800 year old basement. In this basement you can see the street entrance which now goes into dirt about 10 feet below the surface. How did the street level entrance become the basement? I don’t know.

Whatever the reason this happen everywhere. Reims was originally a very flat area but now the whole thing sort of sits on a mound that has grown over the last couple hundred years. As a result finding walls, doorways and other nifty ruins underground is common.

Once again, I have no idea why but I’d love to hear your ideas.

Why I’m a terrible guide – continued:
So after touring La Crypte de Notre Dame de Paris we were miffed but not undone. I was still under the impression that the catacombs were right near Notre Dame de Paris. I knew people always waited by the tower so we got in line. A few minutes later we started looking around and realized that it was to go on a tour of the tower, not the Catacombs.

Sorry Gary. On the plus side we did see some hot german tourists because we were there.

Abashed and hungry we abandoned the catacombs and went to lunch. I took Gary to eat the afore mentioned legendary Pizza Kebab (Which I know how to find). It was not a disappointment.

We still had time so we just went to the Eiffel Tower.

Travel Tip: When going to the Eiffel Tower there are Metro stops called “La Tour Eiffel” do not get off at these stops. They suck. Instead take the Metro to Trocadero. This is the best vantage point of the tower and is about a 5 minute walk from the base. 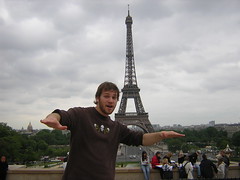 We snapped photos, climbed the thing, admired the view of both the vista and german tourists (I really want to goto Germany all of the sudden). Speaking of which, I have another travel tip. 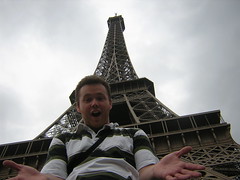 Travel Tip: The Eiffel tower can be tackled two ways. You can take the Elevator to the 1st or 2nd floor (in America we would call them the 2nd and 3rd floors) or the stairs. The stairs is cheeper and has, generally, almost no line. I would opt for the stairs anytime. At the 2nd floor (3rd american) you have to buy a second ticket to take an elevator to the very top. You can not get there on the stairs. You can however take any elevator down for free.

Last time I was on the Eiffel Tower was right around Christmas time. They set up an ice skating rink on the 1st floor (The bottom platform) and offered free skating with free skates. If you can go to Paris in the winter skating the Eiffel tower is a must. 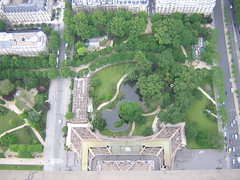 Gary really liked the Eiffel Tower. It was the most excited I’d seen him this whole trip, the next closest was Notre Dame de Paris. From the Eiffel Tower you can see every major attraction of Paris (Not including Disney Land, did you know that was still open? It is.) Because of this Gary got to see a lot of stuff without actually going there. He said it counts because he saw it, whatever works I guess.

It was getting late after the Eiffel Tower so we caught a train out to Chartres where we were staying with the Evans family. We also dropped by he Cathedral there before spending the evening with the Evans. 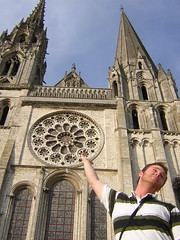 Do you look for Private, Comfort, luxury, Safe, experienced driver, and Effordable price? Then you have chosen the correct shuttle service. Try us you will never regret. You can Book Online or Call us at any time to 0033 63 86 81 272 We are available 7days a week and 24 hours a Day.