Europe Day 10 – Paris and the Catacombs

After consulting some maps and the interwebs at the Evan’s place I zeroed in on the Catacomb’s location. After getting to the train station Mont Parnasse in Paris we took off on foot. The Catacombs find their edifice at La Place D’Enfer Rochereau (something like Rochereau anyway) and is about a 15 minute walk from Mont Parnasse. Just follow the metro stops. Around the cemetery and you’ll be fine.

The catacombs are pretty cheap to get into. I thought it would be more but it was only like 3 euros or so. When you first go down you’ll walk through a lot of tunnels. Some people want to ooh and ahh at these tunnels. I mean, they are cool, they were built in the 18th and 19th century. Even so you can pretty much just cruise right through all this. Tall people, like 6’1 or more will have to bend over sometimes.

When you reach the entry you’ll know it. Above the door is an inscription reading “ARRETE! C’EST ICI L’EMPIRE DE LA MORT” or “STOP THIS IS THE KINGDOM OF THE DEAD.” The catacombs have interesting inscriptions all over the place mostly commenting on the transitory nature of life. They are all in Latin or French and often both. I thought they were interesting and if you can go with a French speaker get them to translate the french ones for you. 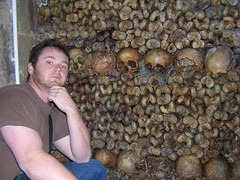 Even if you can’t read the morbid commentary (the atmosphere doubles the effect) the bones are plenty interesting enough anyway. Some of the skulls form hearts or crosses. Getting good pictures can be hard because using flash is not allowed but it can be done. 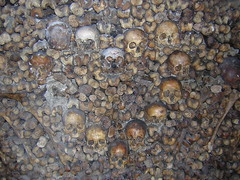 Some of the bones seem to have been just tossed in places while others exhibit a lot of design. Some of the skulls even still have their teeth. 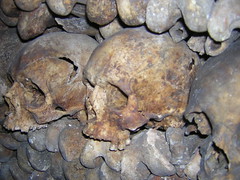 After going through the bone depository we passed through two cave in sites that have very high ceilings because of it. They’ve been reinforced now. We headed out and to get some lunch. 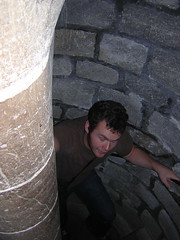 I wanted to go to this Creperie that I really love but I couldn’t remember where it was. I knew the directions were in my email but without a computer and not wanting to spend any money to check something that would take 30 seconds what was I to do? This leads me to another travel tip.

Travel Tip: If you just need to look something up quick on the internet trying stopping into a computer store. The computers are often connected to the internet and you’ll usually have enough time to look whatever up before they ask you to leave. Try to peruse a little bit before and after so that you look less like a mooch.

We stopped in an Apple store and I found the address. We walked to the Creperie only to find it closed. We picked up some sandwhiches and headed back to Chartres for another evening with the Evans. Orginally we were going to go out to Compiegne this day before going to Belgium but we still want to see Claire before leaving.