When we arrived at the Suisse border we looked at where all the trains were going and hoped on a train to Bern. Neuchatel is by there as well as Bienne. I’d heard of both these cities from a swiss friend. We got to Bern and headed to Bienne. Bienne is a town populated by prep school students from all over. My swiss friend, Cannonica, told me that lots of Canadians go there, get drunk, smoke weed and party like lunatics. 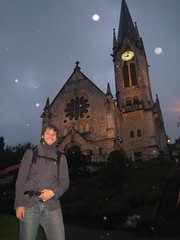 Sounded like a pretty good place to find a bed. We walked around scoping out spots to sleep and had a hard time meeting anyone. We ate in the cleanest Kebab shop I’ve ever seen with a nice Iraqi kurd. He told us that the war was stupid but that arabs were stupid. I had my Iraq’s most wanted deck of cards and he told me all those people were…uhh…”crappy.” He also showed us a picture of Condalesa Rice and revealed that he had a secret crush on her. 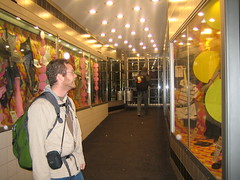 Since we didn’t meet anyone in Bienne we headed back to Bern. We found a corner in the train station to sleep. 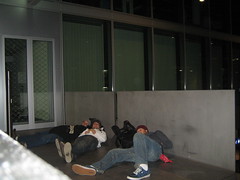 We were kicked out an hour later. We found another spot by a bank and slept until 40 seconds later a security guard kicked us out. It was already 2-3 in the morning and we got to a park and slept on the benches there. In the morning we caught an early train to Venice. It was so cold in switzerland that we needed to head south.

An Aside:
When we were walking aroudn Switzerland Lewis and Gary asked me if “Suisse” meant bank. I was so confused at their question. Suisse is just what the swiss call switzerland. It was funny and I laughed. I’m so funny.

Jon, are you spamming my blog?

Jon, are you spamming my blog?

another name for Switzerland is 'sugheilhotblondesbabesdescewe'

another name for Switzerland is 'sugheilhotblondesbabesdescewe' Maker Faire was awesome. Sandy

Another name for Switzerland is Switcherland... pass it along.

Another name for Switzerland is Switcherland... pass it along.

the picture on teh top is just amazing!!j'aime trop!!!!

the picture on teh top is just amazing!!j'aime trop!!!!

an iraqi with a secret crush on condeleza rice? no one could make that up.

an iraqi with a secret crush on condeleza rice? no one could make that up.