Getting back on the train for Sicily was basically the best idea any of us had ever had in our entire lives. The ride was beautiful though we spent most of it passed out. We were still tired but we took the train all the way to Catania on the eastern coast of Sicily. The train actually went directly into the boat at the shore and then a ferry took us, train and all across to the island.

We took a little video of the boat…it’s not that exciting but it lets you see what we’re talking about. 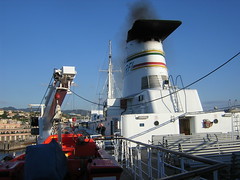 That evening we walked around a lot looking for an access point. We picked up some sandwiches, Lewis got chicken while Gary and I got horse. Pretty good though I prefer a good kebab. We took plenty of time to take pictures and enjoy the night life.

Walking around looking for a plug to charge my laptop was the first step. After 40 minutes we found a store that sold outlets and had 100s on display in their window…that’s just sick. We finally stopped in front of an open bar, in the middle of a park, and plugged into an outlet that was randomly sticking out of the ground.

Charged up we wandered more looking for wifi. People were everywhere, just milling around at 11pm. Pretty cool, it’s like a party town for families. Because there were families just out for a stroll. Way cool. We finally found a connection to find out where the nearest church was at an ice cream stand. 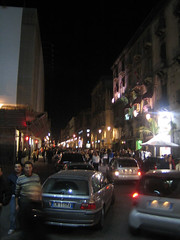 Addresses and directions acquired we made a B-line for the beach. We had to jump fences, face dogs and strage people but we finally found a nice sandy beach. We laid down in front of some changing huts and went to sleep. That worked great for a few hours until it got way too cold. He huddled inside the huts and got a few more hours before waking up sunday morning. 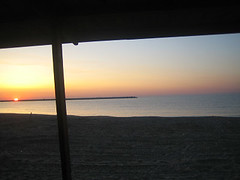